[responsivevoice] For the last 35

years, I have explored the value of the Bach Flower Remedies to address the emotional component in psychological and physical illness. My beloved, dearly departed friend Stephanie sent me my first set all the way from California when I was pregnant with my fourth child. In order to get them to me, Stephanie had them shipped to my parents in New York so that they could send them on to Israel.

Before she forwarded the package, my mom perused the manual. What she saw there somehow compelled her to add a note that cautioned me, the psychologist, to be skeptical of what she viewed as 38 bottles of snake oil. She did not think it was possible that they could deliver on what they promised.

At first, I, too, thought they were too good to be true. Nevertheless, I loved the idea of them, as articulated or dreamed up by Dr. Edward Bach.

I loved the way he differentiated between different kinds of fear, giving each one of them a specific flower remedy. There were flowers for over-concern for the welfare of another human being and flowers for the fear of losing one’s self-control.

I was tempted to use this framework clinically, though I wasn’t entirely sure what that would entail. Remarkably, during that very same week, the universe set me on a path to find out: I was approached by two separate women with the same dilemma. These mothers both reported that their daughters, young girls under the age of ten, experienced such terror in the night that they would wake the whole house with their screams. This happened several times a week.

I decided to put the remedies to the test addressing a very specific situation. To each woman, I said: “I have just started learning about a type of remedy that may help.” According to Edward Bach and others, the flower called Rock Rose was to be administered for extreme terror and fear in the night. It would restore peace to the little girls’ minds and bring the families’ sleep back to the status quo.

The mothers were only too eager to give this previously unknown possibility a try. In order to preserve the integrity of the clinical trial, they were instructed to tell their daughters that the flower drops were a vitamin that would help them digest their food more successfully.

Within a week, both mothers, dumbfounded and inestimably grateful, reported that the girls had stopped waking up screaming in the night. I was enthralled. I had taken a chance with no expectations, conducting this little, private experiment of mine. It was such a delightful surprise to not only help these households, but also have proof positive that the remedies weren’t snake oil at all. They had actually worked.

It’s not often that one can recall the exact moment in time when you “get it.” It was then that I decided I would take this matter very seriously and give appropriate flower essences to friends and family. Some years later, I introduced them to my practice as well, treating hundreds of patients at the rehab with a combination of wild and wonderful interventions coupled with the Bach Flower Remedies.

I’ve been dosing myself with the flowers over these decades, too. While I’ve seen dramatic leaps and shifts in my personality and behavior, I’ve heard it said that a doctor who treats himself has a fool for a patient. I can’t argue with this; I think it makes sense that we tend to see ourselves as better or worse than we actually are. I am hardly an impartial diagnostician when it comes to my own crosses to bear. I can’t do for myself what I can do for others. And yet for a long time, I thought that I would be the wisest practitioner to deal with myself.

It wasn’t until several months ago that I got the push I needed to go about this another way. When a very close friend of mine paid a visit to an official Bach Flower practitioner, I was reminded that perhaps I would be better off NOT diagnosing myself. I wanted to have a stranger meet me, draw her own conclusions, and take care of me for a change.

This wasn’t easy. I have a sneaking suspicion that I might have confused the 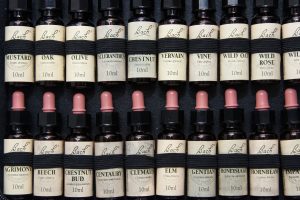 practitioner. I came into her clinic knowing too much, full of explanations of who I am and what I need.

We did come to an agreement that she would not divulge to me what remedies she was giving. While it’s tempting to know how she sees moi, who I am and what I’m about, it’s probably much better that I have no idea what she gave me and what her rationale was. If I were to know, I might be inclined to dispute her findings or feel insulted that she spotted a nasty character trait I choose to ignore. As my assistant Shani just reminded me, the whole point is not to continue to misdiagnose myself.

I will see her again next week and we will recalibrate, I assume, what would best suit me. I do so hope she can help me reach the highest I can be. It’s exciting to subject myself to a stranger’s interpretation of who I am and what makes me tick.

I must say, I’m proud of myself for thinking that someone else might be able to help me. It’s a bit humbling—and I can stand a bit of humbling.

Here’s to my health and wellbeing. [/responsivevoice]